​Alice has been playing the harp and singing since she was eight-years old under the guidance and instruction of the late and great Eily O’Grady and Frank Patterson. Alice was a member of “The Gaelic Harpists and Singers of New York” which later evolved into the current “Strings of Tara” group who continue and have performed around the tri-state area including numerous sold-out concerts at Carnegie Hall, as well as a PBS TV Special “Galway to Broadway.” Alice began playing Irish traditional music with Annmarie Acosta and has represented the Mid-Atlantic Region at the Fleadh Cheoil in Ireland. As a solo artist some of Alice’s most memorable engagements have been singing the Irish National Anthem and playing the harp for the American Irish Historical Society’s (AIHS) annual Gold Medal Dinner, a guest artist for the Teelin Irish Dance Company’s “Celtic Storm” Show, as well as joining Cherish the Ladies for their annual Christmas concert in Tarrytown, NY. 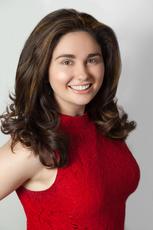 For the past 15+ years, I've been fortunate to be taught by, perform with, and be apart of well-known events, with talented musicians.

I've had the privealage of playing at many events and look forward to sharing their kind words. 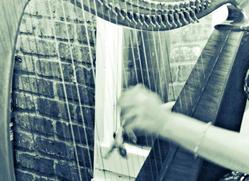 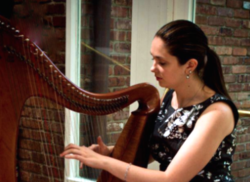 I'm proud to announce my music residency with Saints & Scholars of Yonkers, NY.​

I'm passionate about sharing harp music to new ears in the community.

​Alice is a NY tri-state area based musician who has been playing music since the age of three. Alice grew up in the McLean Heights area of Yonkers, NY-Westchester County bordering Woodlawn, Bronx. Her parents exposed her to sports and music at a young age, encouraging the piano while wearing her baseball cleats and running to a tap class after. She started to sing and play the harp under the guidance of the late and great Eily O’Grady Patterson and her husband the late tenor, Frank Patterson. Alice owes her love and passion for the harp and performing to her teacher Eily. She was part of “The Little Gaelic Singers and Harpists of New York” which evolved and grew into "Strings of Tara" today. Alice has been fortunate to perform around the tri-state area, numerous sold-out concerts at Carnegie Hall, as well as a PBS TV Special "From Galway to Broadway." She has had the privilege of working with artists such as Andy Cooney, Ciaran Sheehan, Ronan Tynan, and Gay Willis.

Alice is first-generation Irish-American with her roots deep in Ireland, which bring her back almost every year. Alice then found herself playing Irish traditional music when an U12 Grupa Ceoil needed a new harpist. Grúpa Ceoils under the directions of Annmarie Acosta Williams, Michelle Bergin, and Mary Rafferty brought her to represent the Mid-Atlantic Fleadh in Ireland, as did many of her solo performances placing first.

Currently, under the religious music umbrella, Alice is a co-music director at St. Matthews/OLPH Church in Hastings-on-the-Hudson singing for weekend Masses, weddings, and funerals. She is a member of the Metropolitan Catholic Chorale and participates in The Saint Cecilia Academy music program at St. Joseph’s Seminary in Yonkers. Alice is available to teach beginner voice and harp lessons. You may even spot her out around the "Emerald Mile" playing in some Irish trad seisiuns!